Seven wonders of the ancient world

Seven wonders of the ancient world

. They refer to remarkable installations from classical antiquity, which are mentioned in numerous tourist guidebooks that were popular with tourists in ancient Greece. Especially in the first and second centuries BC, the most prominent of these booklets is a booklet written by Antipater al-Sidawi and Philon the Byzantine,

The Egyptian myth, which will remain the most prominent among them, as it is until now and is still relatively intact until our present time, and because of its greatness and glory, and the civilization of Egypt is considered an amazing and exciting civilization with mysteries and mysteries of all ancient civilizations …

As for all the Seven Wonders of the World, they are myths that have never come before, nor in their splendor or beauty before. Although there are modern wonders, the ancient wonders remain on the throne of architecture and aesthetic art.

. What are the Seven Wonders of the World? Well, that is what we will show during this video. 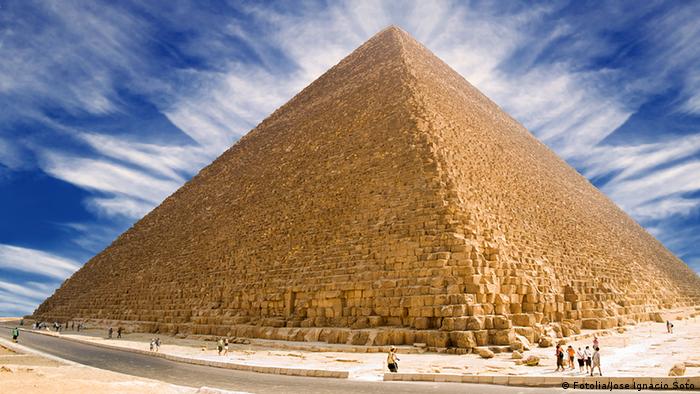 Thousands of years passed and the times and forms of life differed, except that the three pyramids of Egypt and knowledge are everywhere and in particular the first of the Seven Wonders of the World that we will talk about …

.. the face of every tourist who visits Egypt and witnesses this great architectural edifice, which was built during the reign of Pharaoh Khufu and continued for nearly 20 years to be completed in the year 2560 BC,

Also, the pyramid of Khufu made researchers disagree about the method of building this engineering marvel by all standards, so how did he build this colossal size of this pyramid, as the high accuracy of its construction led to the emergence of many theories that talk about how it was built and created, and this pyramid was built from a number Large stone blocks are enormous weight.

The pyramid of Khufu, which was dedicated to him and his wives, includes many internal corridors and rooms that are believed to have been built to contain the pharaoh’s sarcophagus and what he might need to live in the afterlife – as the pharaohs believed. The second miracle we will talk about is the Hanging Gardens of Babylon, which are located in the Iraqi city of Babylon, and they are the property of King Nebuchadnezzar II

. The Hanging Gardens of Babylon were classified among the ancient wonders of the world, as they were a masterpiece par excellence,

and were also hung on a huge number of stone columns, which consumed an enormous number of palm branches, and the entire structure supported a great weight of good and paved soil.

Many theories have emerged regarding the structure and location of the gardens, but there is another theory famous for the writings of the British archaeologist Sir Leonard indicating that the gardens were built within the walls of the royal palace in Babylon,

which is now in southern Iraq, which are rooftop gardens placed on a series From the terraces that are irrigated by pumps from the Euphrates,

There are some other theories that say that the gardens were not suspended as some think, but they are called that because plants and flowers grow in them, and also grow on the balconies of the royal palace.

Like the plants that were growing with them were up to 600 feet, and this made them appear as a hanging, and these gardens contain many, many

From trees, fruits, and various vegetables, they have been chosen with great care, and water is supplied to them from the Euphrates through pumps or canals.

We also mention the Greek historian Herodotus that the gardens of Babylon were surrounded by external walls, reaching a length of 90 km, a thickness of approximately 24 m and a height of 97.5 m, in addition to the double inner walls of the garden, as it contained many places of worship, castles, and statues made of pure gold.

The gardens contain three terraces suspended on several columns, 75 feet above the ground.

It also contains eight gates, and the Ishtar Gate is the largest and most famous garden gate, and the gardens are surrounded by a huge moat, which is a watery one that was used to repel any external attack.

The gardens of Babylon also enjoy charming and picturesque landscapes, which bring happiness to everyone who looks at them.

Despite the multiplicity of stories about it, it indicates the greatness of the building and the splendor of the construction that its visitors felt, but now it has become a memory of history, as a result of the earthquake that struck it in the second century BC. 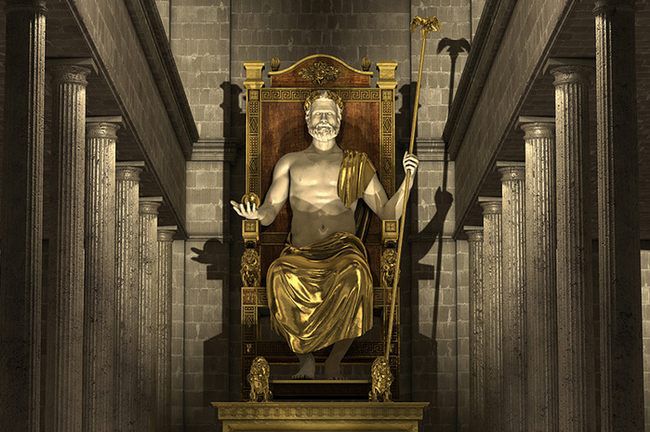 The famous Greek was revered and appreciated by the Greek people for their strength, heroism, and courage, which they enjoy.

In the year 432 BC, specifically in the Greek city of Olympia, a statue of Zeus, one of the Seven Wonders of the World, was built by the Greek sculptor Phidias and a special team of his assistants, as a tribute to the god Zeus.

The height of the statue, which was carved in one of the Greek temples, was approximately 12 m on a large wooden base, and the gold and ivory materials formed the body of the statue,

while the cloak worn by Zeus in the statue was made of pure gold and sits on a throne made of a mixture of precious stones, gold, and wood Ebony.

He also holds in his left hand a scepter studded with all forms of metal, and in his right hand a small statue of the Greek goddess of victory.

. Unfortunately, this statue does not exist now, as it was destroyed by fire more than 2,500 years ago. 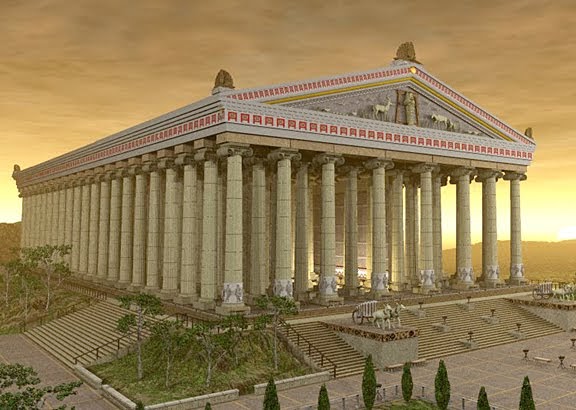 In the sixth century BC, specifically in the Hellenistic era, the Temple of Artemis was built and constructed, whose structure was made entirely of marble and contained many huge columns.

Although his remains are now just the remains of the foundation on which the temple was built, and a number of 36 columns surround

. In the city of Ephesus or Ephesus, which is located in present-day Turkey,

However, the British Museum of London contains in some of its exhibitions some of the remains of this great edifice. 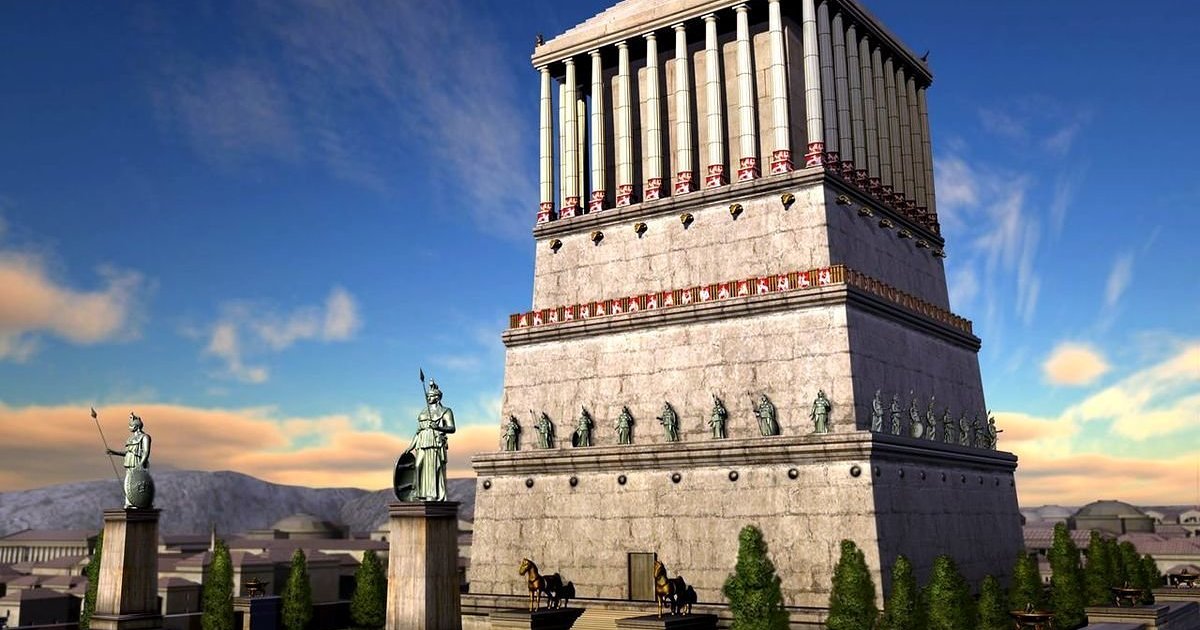 The Mausoleum of Mussolus is among the Seven Wonders of the Ancient World, which was established after the year 367 AD,

and there are some indications that its construction dates back to Mussolus, the ruler of the Karia region and founder of the city of Halicarnassus, which is located in present-day Turkey.

Where he built it at that time to bury it after his death as a reward for his establishment of this city.

The Mausoleum of Mausolus contains three main components that make up it, which are: the huge hall that contains the tomb room, a group of up to 36 Ionian-style columns, and the pyramid, which includes 24 steps.

Knowing that the total height of this shrine reached approximately 43 AD, and it was decorated with many different inscriptions that carry many symbolic meanings that refer to hunting, battles, and sacrifices that were made in this era.

This mausoleum was demolished due to a flood during 1494 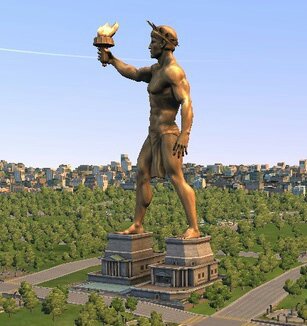 During the Hellenistic period, the Colossus of Rhodes was considered the tallest and largest statue during this era, as it was constructed on the Greek island of Rhodes, which had commercial and economic importance.

The story of the creation of this statue began when Antigonus of Macedon sent forces to punish Rhodes for her alliance with Baltimus I, King of Egypt so that the war between the two sides would continue after that for a whole year.

After the end of this year, Baltimus sent relief to Rhodes to defeat Antigonius’ soldiers, who numbered more than 40,000 fighters, leaving behind their armament and weapons.

So the people of Rhodes sold this huge equipment to be able to create a huge statue to thank their gods for the victory, as they believed in this fact,

and indeed the Rhodes statue of the sun god Helios was created, and this edifice remained standing until its collapse by an earthquake that led to its shattering. 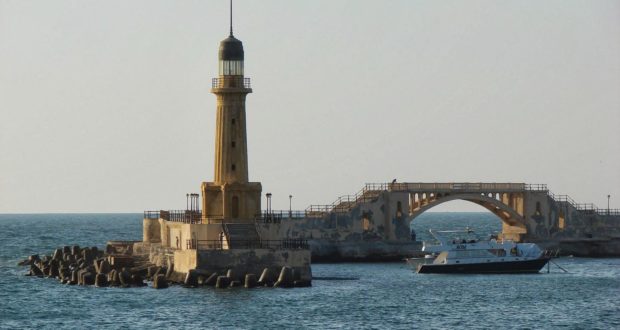 The last of the Seven Wonders of the World, which is also present in Egypt, such as the pyramid of Khufu, is the ancient lighthouse of Alexandria, which is located on the island of Pharos, located within the Alexandria Governorate in Egypt.

The idea of ​​constructing the lighthouse goes back to Baltimus I, but he died without starting construction, which prompted his son to start building work, which lasted for an estimated period of 33 years, and the material cost was very exorbitant at that time.

After the completion of the construction work, its height reached 91.44 m, to be one of the greatest and longest building edifices ever built by man. This lighthouse was lit daily by lighting fire at its top.

As a result of many earthquakes, they were removed and destroyed, after they had destroyed them and made most of them in debris.

The most important tourist attractions in Italy

The best tourist destinations in Greece and Rhodes

The most important tourist attractions in France

Pictures for 8 most beautiful beaches in Italy